This is an up and coming downtown. The city is sinking a lot of money into this area. A brand new light-rail system is nearly finished and goes through the middle of Downtown. If you’re from out of the area and unaware of our light rail systems, the light rail is relatively new here and is a very successful mass transit system.

The downtown is plenty of cultural activities, with cool, little art nooks and has some modern 1950’s style. Mesa boasts several well-respected museums.

Aside from a small and attractive core, this area still needs a some work and a number of developers are taking on the project. New modern and attractive apartment complexes are going up around here, but there is still a lot of inventory, indicating that it is a good time to buy.

Drivers:
Aside from the city’s notable efforts, a number of small colleges call Mesa home. The new Benedictine University is located in the downtown area and the well-established Mesa Community College just celebrated its 50th anniversary.

What Will Likely Happen Next:

The future should see a number of small- and medium-sized multifamily developing at a steady rate near downtown over the next few years. 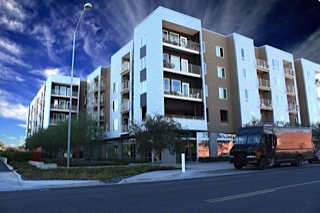